This map, courtesy of a tweet by the ever-fascinating @LindaRegber, brought home a point I had never really considered before. 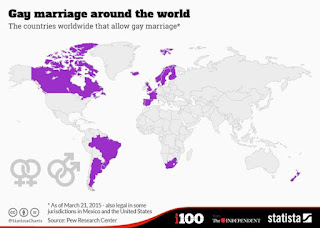 Britain, the core country of the Anglosphere, allows it. It is joined by the settler colonies of Canada, New Zealand and South Africa and, as the caption on the map indicates, parts of the United States. By contrast, the Francophonie has little place for gay marriage outside the metropolitan area. Hispanohablantes are a little bit more enthusiastic. And, of course, in the Scandinavian world it appears to be almost universal.

Gay marriage at the moment is very clearly a marker for Anglospheric culture, which itself has roots drawn from a Scandinavian planting, as Norse and Danish influence on the British Isles was considerable, for a time. This will probably change sooner rather than later, but at the moment, tolerance for gay marriage sets English-speakers apart.

My high-school daughter asked me to help her revise for a history test, one question of which will ask her about the causes of the War Between the States. So I reproduce here the brief analysis we constructed.

The immediate cause of the War Between the States was the bombardment of Fort Sumter, in the harbour of Charleston, SC, in April 1861. As a result of this, President Abraham Lincoln of the United States called for volunteers to serve three months in the militia, in order to suppress the insurrection. A military conflict with the seceding states became inevitable at that point.

But why did Fort Sumter have to be bombarded?

Between December 1860 and February 1861, seven states seceded from the United States, as they saw it reclaiming their sovereign rights. However, the federal government controlled things like the naval, military and postal services. The question of to whom these belonged would obviously be controversial. In the case of military installations, the presence of a garrison meant that attempts by local or new authorities could be resisted, at least for a time. This is what happened at Fort Sumter.

But why did these states secede?

In November 1860, a split in the Democratic party between northern and southern wings assisted in the election of the Republican party's candidate for president, the aforementioned Abraham Lincoln. Lincoln's party had a plank in its platform stating 'we deny the authority of congress, of a territorial legislature, or of any individuals, to give legal existence to slavery in any territory of the United States'. The question of whether slavery could be permitted in the parts of the United States that had not yet acquired statehood, much of which had been organised into territories, had been extremely controversial before the election/ In the case of Kansas, a mini-civil-war had raged for some years. All the parties took a position on this. The Democrats split over the question of slavery in the territories, with the Northern faction wanting to limit it on the basis of 'popular sovereignty': if the representatives elected to a territorial convention voted to abolish slavery in its territory, slaveholders would have to abide by that. By contrast, the Southern Democrats wanted the right of slaveholders to their human property to be respected in all territories, regardless of local sentiment. Lincoln's election, and even more significantly the election of Republican majorities in the House of Representatives and the Senate, gave slaveholders little hope that in future their right to human property would be respected in the territories. Inevitably, as 'free soil' territories became states, Slaveholding power within the legislature as represented by members of Congress would dwindle. This would open the way for abolitionists to end slavery altogether in the United States.

Thus, the fundamental cause of the civil war was slavery. However, one can argue a secondary cause of state's rights, on the basis that the outcome of the civil war established, by main force, that states have no right to secede from the Union unilaterally. They can only secede if the federal government assents to their departure. But, in the absence of the controversy over slavery, it is hard to see why that right of state sovereignty would have been asserted. Given an opportunity to claim it over tariffs in 1832-3, no state considered that issue significant enough.

Email ThisBlogThis!Share to TwitterShare to FacebookShare to Pinterest
Labels: Little Tutoring, War Between the States

Talk About the Past

(I don't normally blog such extensive commentary about a book, but I wrote it up somewhere else and decided that an edited version could continue the current Canadian theme on this blog.)

The Strange Demise of British Canada describes itself as a response to Igartura's The Other 'Quiet Revolution', a book I have not read, but which I have known about for many years. The issue both books grapple with, the loss of a 'British Canadian' identity during the 1950s and 1960s, applies as much to the United States, where the WASP Ascendancy began to crumble at about the same time. (Although it might also be said to have crumbled in the US in the aftermath of the Great Depression.) Where Igartura apparently sees a transition from 'British Canada' to Anglophonie, in Champion's analysis, the British Canadian identity persists, much less visibly, because it remains the default ideology of Canada.

Champion's interest is in a particular group of British Canadians who gathered around Lester Pearson, the Liberal party politician who is popularly credited with inventing peacekeeping, and who brought to an end the old red ensign flag, with the Union flag in the quarter. The red ensign was replaced by the wildly successful Maple Leaf Flag, one of the best flags currently flying for standing as a representative icon of a country. (It was not, significantly, Pearson's own choice of design.) Champion has come in for some criticism in focusing on an elite group, but I think such a complaint is unwarranted. The whole process he is describing is one of political leadership, and it was decisions at the top that did much to undermine the link between Britain and Canada's Britons.

Champion points out that many of these men had experience of Britain either through war service in the world wars or through study at Oxford or Cambridge university during the interwar period. Many of them were small-town Ontarians, who had grown up in a province dominated by Methodists and Presbyterians. Small towns and low churches possess a kind of basic democracy, despite the presence of a petit-bourgeois paternalism. In Oxford, or in the service, they encountered the British caste system in all its pomp. As rustic colonials, they would already have provided some amusement to the immature representatives of the Ruling Class. The discomfort rural Ontario felt in addition with the presence of deferential servants who expected to fetch and carry was fatal to encouraging close ties with the political elite of the Mother Country. (I focus on Ontario here because Champion points out that Atlantic Canadians seem to make the transition from middle-class dominion to caste-ridden Britain more comfortably.) The drunken academic sport familiarly depicted in Waugh's Brideshead Revisited must have seemed exceptionally alien to boot. Champion makes the point that these attitudes were not exclusively Canadian, but were shared by many Britons, about their own country. Indeed, the difference between modern British attitudes and modern Canadian attitudes concerning the legacy relationships of Crown, Altar and Lords are not very far apart.

But, Champion could have taken his analysis a little bit further. Consider: in 1957, John Diefenbaker led the Progressive Conservatives to a plurality of seats in the House of Commons, pledged to reduce Canada's dependence on the US economy and to foster closer ties with Britain. However, Britain was already beginning to look to a future as part of the Common Market, which took formal shape with an application for membership in 1961. Diefenbaker was outraged. But did it not prove that Canada needed to accommodate a future without formerly close political relationships with Britain? Tied into the restrictive trade arrangements of the Common Market, Canada's previous alternative to the US for exports and investment would no longer be effective. New relationships would have to be forged. A new flag becomes a symbolic gesture that costs little and, done in a particular way, conveys a lot about self-image.

Champion's saddest chapter is his last case study, about the unification of the Canadian Forces. Pearson and his government come across as no better than a bunch of Stalinists (or, to make an allusion more of their time, Maoists). They did away with the 'Royal' prefixes of the navy and air force, despite the fact that the country remained a monarchy. They imposed a new uniform common to all services, and Americanised the ranks of an air force that historically did not share the same institutional history as the US Army Air Force. The Royal Air Force ripped away its army roots, in very 'Pearsonian' fashion, and its rank structure, with Flying Officers, Squadron Leaders and Group Captains, among others, was very descriptive and modern compared to 'colonels' and 'majors'. It really was too sad for many words.

The book assumes more knowledge of twentieth-century Canadian history and politics than I imagine a typical non-Canadian would possess, and in particular the lack of information about the 1945-64 period might prove a handicap. I don't entirely agree with Champion's subtle perceptions, but he does make a broad point that the more dominant narrative, that of Igartura by all accounts, doesn't neglect so much as actively ignores. Champion raises some interesting questions about the kind of 'mythic history' that provides the basis to school curricula, the environment in which most people make their limited acquaintance with history. However, the 'one size to fit as many as possible' presentation to impressionable minors neglects the reality that history is a constant battleground of competing visions. The losers in the flag debate simply had a different view of Canada, one in which the British -- or more specifically English -- Canadians did not have to retreat into a hapless anonymity, while still underpinning so much of what passes for 'Canadian'.

Paul Brewer
Paul Brewer is writing a PhD dissertationi in history for Wilfrid Laurier University in Waterloo, Ontario. He is also an amateur sabermetrician who periodically has tried to apply sabermetric methods to cricket statistics. He can be also be found at baseballthinkfactory.org writing as 'fra paolo'.